Tiny Olympia oysters used to flourish in the waters of Puget Sound, but overharvesting and pollution brought them to near extinction. Marine Resources Committees, in partnership with multiple organizations, are working to restore native Olympia oyster populations in their historic range in the Northwest Straits region.

Back to Our Work

The Olympia oyster, Ostrea lurida, is the only oyster native to the Pacific Coast of North America, ranging from southeast Alaska to Baja, California. It is most abundant in estuaries of small rivers and streams and was an important food item of coastal Native American tribes who often created settlements near oyster-rich tidelands. It is a historically significant marine species, noted for its abundance by Captain George Vancouver’s expedition to the region in 1792. During the 1880s California Gold Rush, oysters became a major state industry. The native bivalve became a popular delicacy in the early 1900s with harvest levels increasing dramatically and oyster farms developing throughout the region. 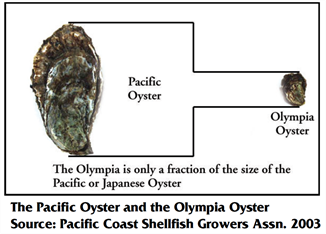 However, urbanization and pollution took their toll with the discharge of contaminants and smothering silt from road construction, bringing on a major decline of Olympia oysters. The over-harvested populations were further impacted by waste from pulp mills in the first part of the twentieth century and the introduction of predators such as the Japanese oyster drill. While some small populations exist in a few places in the Puget Sound region, they are a fraction of historic levels. The large oysters now prolific on our shores are the Pacific oysters, a non-native species brought from Japan. The wild Olympia oyster may be confused with a young Pacific oyster, but is distinguished by its thinner shell with a lack of sharp flukes. 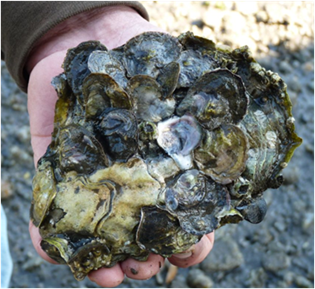 At one time, native oyster beds formed one of the “foundation” communities in Puget Sound and coastal estuaries, providing valuable ecosystem good and services. Native oyster beds create complex, three-dimensional habitat for invertebrates and small fishes and foraging locations for larger animals including Dungeness and rock crabs, juvenile salmon, perch and a variety of bottom fishes. Filter-feeding bivalves such as Olympia oysters feed on phytoplankton by filtering large volumes of water (over five gallons per hour), thereby improving water quality, removing pollutants and nutrients from the water column, and maintaining the water clarity necessary for eelgrass and kelp growth. Restoration and enhancement of this foundation species will provide significant benefits throughout the Northwest Straits marine ecosystem.

Goals for this project are multiple and vary depending on the parties involved. In general, the objectives of this work are to:

How we’re doing it